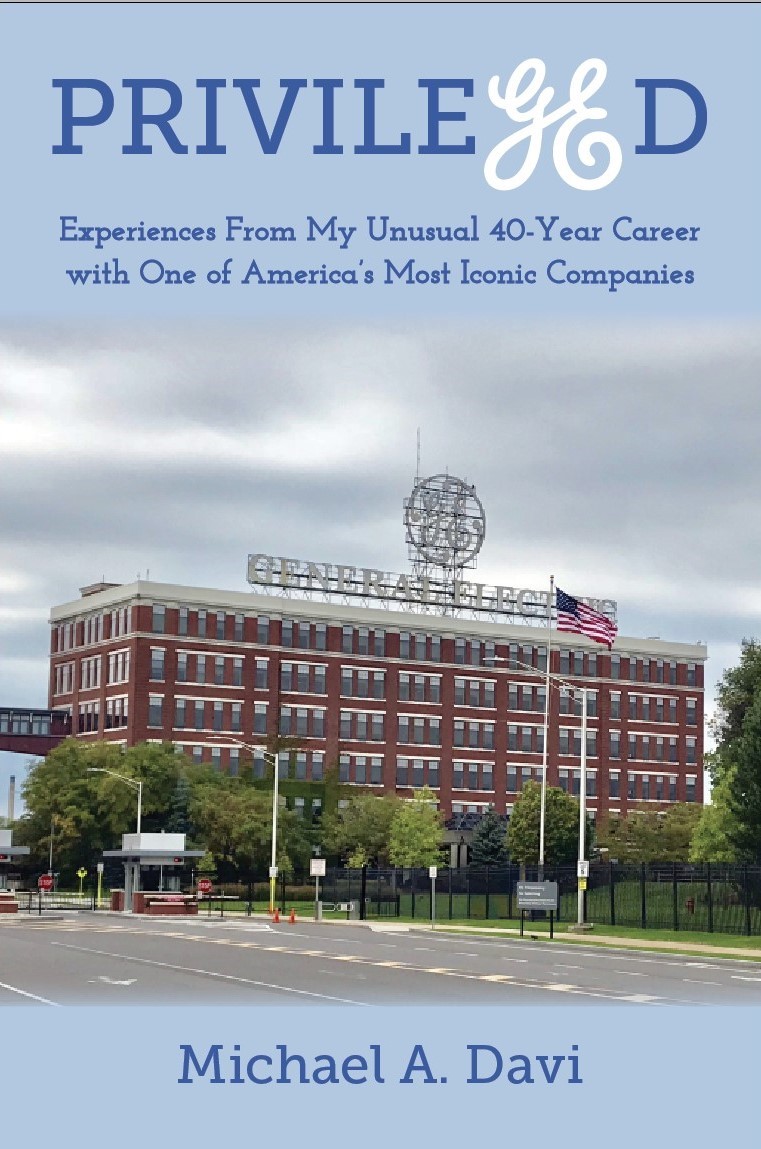 Use CONTACT tab above to request personalized print copies directly from author.

PrivileGEd - Background and Extended Summary listed below (scroll to read).

I took on the immense challenge of writing this book for several reasons. My main goal is to leverage the book to influence today’s young people to consider science and technology as a career. By documenting the ups and downs of my own unusual and varied career at GE, made possible by the educational opportunities I pursued, I hope to instill a sense of overall optimism—particularly in those who may share my humble background—while highlighting the critical importance of a solid education.

Second, I want to pay tribute to my family. In the Prologue, I begin with the story of my immigrant grandparents, all of whom were non-professional employees at GE at some point in their lives. Like many of their fellow immigrants, they struggled with language, culture and a myriad of other issues, yet they persevered. And my own parents, with values shaped by the experience of the prior generation, set the stage for my opportunities. From this vantage point, my GE career can be thought of as a realization of “The Great American Dream” my grandparents envisioned when they came to this country.

Finally, I must acknowledge my many GE colleagues who contributed to my continual learning process—and my success. I worked with literally thousands of remarkable people from a kaleidoscope of different cultures and ethnicities. This broad exposure gave me a global awareness that would seem almost impossible to imagine in the confines of a small northeast city. I’ve established lifelong friendships with many of my associates, and our shared bond is truly remarkable. Whenever I encounter a former co-worker, the recognition and camaraderie are instantaneous and genuine, as if we were never apart. I still meet with many of my former colleagues regularly to relive past times, discuss current events, and offer each other help and advice.

"PrivileGEd" tells the story of my 40-year career at GE, beginning with college Co-Op assignments that led directly to my first professional Services Engineering offer. Navigating a most tumultuous first year with a new and difficult manager, I luckily was involved with some very unusual projects that kept me excited about my new job—and occasionally overwhelmed. Eventually, I migrated to work on gas turbine products, which ultimately became my trademark area of expertise.

After an unexpected layoff, I took a three-year "nuclear detour" with another GE division. Again returning to work on gas turbines in an Application Engineering role, where I assisted our Sales folks in selling power plant equipment for about 13 years. The role was a career-defining one, leading to even more worldwide travel, interactions with an outstanding cast of GE talent, and prestigious management recognition as I helped secure multiple major project wins.

Following these successes, I moved into the commercial side of the business—first managing an artificial intelligence "experiment" and then taking on a momentous opportunity to manage the execution of multi-billion-dollar contracts for one of our most strategic customers.

I eventually returned to my engineering roots following an unfair ambush while in another commercial position, quickly earning a promotion into an elite group of recognized expert titled engineers. As the business and management continued to evolve, I ultimately returned to Services Engineering, which created an unplanned, yet fulfilling, symmetry to my career. Little did I realize what a fantastic finish I would enjoy in my final role, serving on the staff of the Services Engineering vice president and chief technology officer.

My final Services role afforded me a most fortunate opportunity to work with a fantastic Global Research executive.  Here I enjoyed even more success, thoroughly relishing in interactions with some of the most talented folks on this planet. My responsibilities also included the privilege of leading serviceability efforts on GE's advanced HA (high efficiency air cooled) gas turbine. Working alongside both European and domestic Services Engineering teams was extremely gratifying as we prepared for the initial European launch of GE's most advanced 9HA gas turbine product.

As a fitting finale to my career, I played a pivotal role in enticing retired NASA shuttle astronaut Dr. Story Musgrave to speak to my GE colleagues on three separate occasions. Dr. Musgrave delivered some very memorable and inspiring talks, and I had the pleasure of hosting this long-time hero while getting to know him on a very personal basis.

My career concluded on a spectacular note with recognition from the business for Services Engineering contributions made on the latest HA turbines, an accumulation of 17 patent awards, decades of great memories, and solid lifelong friendships with outstanding colleagues. All of it was much more than I ever could have imagined growing up in a small upstate New York town. Taking advantage of every educational and work opportunity that came my way opened doors to an incredible, and very "PrivileGEd," journey.